HANDY HINTS TO KEEP YOU SAFE ...

DRUGS - A CONCISE GUIDE ... and SAFETY STEPS
_______________________________________________________________________________
AMPHETAMINES
Commonly a powder found in a variety of colours, but may be in a pill or capsule form.  Taken orally, injected or inhaled, amphetamines cause excitability, talkativeness and feelings of unlimited energy.  Regular use can lead to weight loss and psychological dependence.
ANTACIDS
Sold under a variety of brand names, antacids neutralise excess acid in the stomach.  When used as directed, antacids have no side-effects, but when used to excess, those containing magnesium can cause diarrhoea and those containing aluminium can cause constipation.  If symptoms persist seek medical advice, as antacids can mask stomach ulcers.  Take antacids about an hour after meals and certainly never with other medicines.
ANTIBIOTICS
Prescription only drugs effective against a broad range of bacterial and fungal infections, antibiotics can also kill useful bacteria, such as in the intestine that aids digestions, and diarrhoea may result.  Many antibiotics should be taken on an empty stomach, whilst others require to be taken with food.  Antibiotics do  not prevent or cure viral illnesses, such as colds or flu.  Over-use may lead to the development of resistant strains of micro-organisms.
ANTIHISTAMINES
Antihistamines are sold over the counter and are the first line of defence against the allergic reaction of hay fever, although some cause drowsiness.  They should not be combined with alcohol, or by people with epilepsy or glaucoma.  Antihistamines may cause a dry mouth, blurred vision and stomach upsets, as well as drowsiness.
ASPIRIN
The most popular pain-relieving drug to reduce inflammation of joints, headache and other pains.  Among Aspirin's potential side-effects are stomach pains (caused by irritation of the stomach lining), and allergic reactions, such as skin rash and wheeziness.  To prevent the stomach pain and irritation, always take aspirin with a full glass of water or milk.
BIRTH CONTROL PILLS
The 'Pill' has been the subject of extensive studies, and here are some of the results:
*    Smoking significantly increases the risk of heart disease and stoke in women taking the pill, especially
those aged over 35.
*    The pill is not recommended for women with high blood pressure, thrombosis, liver disease or a family
history of early heart disease.
*    The pill may slightly increase the risk of some types of cervical cancer and some studies state that it may
protect against cancer of the ovaries and the lining of the uterus.
*    Newer formula pills containing lower doses of oestrogen and progestogen, and the progestogen-only pill,
are less likely to cause weight change, breast tenderness, fluid retention, nausea and dizziness.
*    Some medicines cause the pill to become ineffective.
COCAIN
A fine, white crystalline powder, usually taken by sniffing it up a tube or by inception.  Produces state of euphoria.  Prolonged 'snorting' causes ulceration and perforation of the nasal septum.  Crack cocaine is a smokable form, varying from yellow-beige 'rocks' to white powder.  Produces rush of euphoria followed by rapid depression.  Powerfully psychologically addictive.
COLD MEDICATIONS
While no drug can prevent, cure or reduce the natural course of a cold, many medications relieve the symptoms.  However:
*   Decongestants, in the form of nasal drops or sprays, may damage the lining of the nose and cause further
and worse congestion.
*   A cough suppressant also stops the movement of the infected mucus.
*   Many widely used remedies contain combinations of drugs to relieve more than one symptom - i.e:
paracetamol to relieve pain and antihistamines to clear congestions.  Each of the drugs can cause side-
effects, such as drowsiness and wheezing.
DAGGA - see MARIJUANA
ECSTASY
Tablet or capsule in a variety of colours and forms.  Increases awareness and energy, inhibitions disappear, causes dehydration, increased blood pressure and heart rate, and may affect co-ordination.  Has been linked to fatalities, particularly in first-time users who suffer an allergic reaction.
HALLUCINATORY DRUGS - LSD`
LSD is taken by mouth, as tiny coloured tablets, or impregnated in paper and gelatine squares.  Effects include heightened wariness of sound and 'colour' hallucinations may also cause disorientation, panic, persecution mania and conviction of invincibility.  Flashbacks can occur months after use.  Psilorybia is another hallucinogen, found in so-called 'magic mushrooms', a certain species of fungi that grow in the wild.
HEROIN
White or speckled-brown powder that can be sniffed, injected or heated, and the resulting fumes inhaled.  Produces relaxed euphoria, dehydration and lack of appetite.  High addictive.
LAXATIVES
Laxatives can relieve occasional constipation when used as directed.  Used repeatedly may disguise an underlying condition.  Never take more than the recommended dose.  Magnesium preparations act rapidly, but should not be used by the elderly in whom they may cause drowsiness and lethargy.
MANDRAX
Usually sold as flat white tablets, but they may also be in a capsule or powder form in various colours.  The finely crushed tablets are mixed with dagga (marijuana) and smoked in a broken-off bottleneck or pipe.  A depressant of the central nervous system, especially when combined with dagga.  Causes immediate and intense high, relaxation and sedation.  Dangerously addictive, physically and psychologically.
MARIJUANA or DAGGA
Commonly found in herbal form, looking like sage or dried herbs, or as a resin resembling chunks of liquorice or a golden powder.  Usually smoked by mixing with tobacco and gives off an aromatic, slightly sickly smell.  Produces feelings of elation and makes one relax.  Can cause psychological dependence and short-term memory loss and increases risk of bronchitis and other lung problems.
PARACETAMOL
The second most widely used pain reliever, paracetamol is effective for the relief of minor aches and pains, as well as fever, without having the anti-inflammatory benefits of aspirin and, therefore, does not cause stomach irritation.
SLEEPING PILLS
Prescription drugs to treat severe or chronic insomnia are potent medicines and, unless prescribed by a doctor, should not be used by people with mild or infrequent sleeping difficulties.
TRANQUILLIZERS and SEDATIVES
Tables or capsules in various colours and forms available on prescription.  Usually taken orally, they can cause drowsiness, light-headedness and a feeling of relaxation.  May cause psychological dependence. 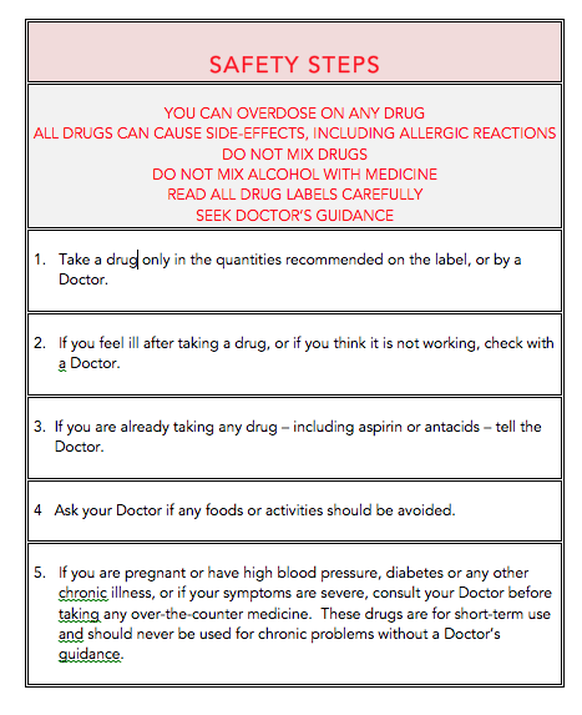 To the top of the page